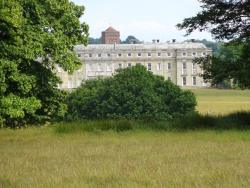 The town is mentioned in Domesday Book as having 44 households (24 villagers, 11 smallholders and nine slaves) with woodland and land for ploughing and pigs and 24 acres  of meadows.
Petworth is the location of the 17th century National Trust stately home Petworth House  The grounds of which were known as Petworth Park were the work of Capability Brown.

Another historic attraction in the town, Petworth Cottage Museum in High Street, is a museum of domestic life for poor estate workers in the town in about 1910. At that time the cottage was the home of Mrs. Cummings, a seamstress, whose drunkard husband had been a farrier in the Royal Irish Hussars.
CLICK HERE FOR PHOTOGRAPHS